In 2009, at the ripe old age of 41, my husband and I tied the knot. Before we got married we agreed that we would try to get pregnant right away and if it didn’t happen for us we would explore adoption. We both agreed that IVF and other modes of assistance weren’t for us. The stress and potential disappointment was something I just wasn’t built for. If we didn’t end up with a child our lives would be fulfilled in so many other ways. We have nieces and nephews and friends’ kids that we love and cherish and figured we’d spoil the heck out of them.

For the first four months of our marriage I commuted from Minneapolis to Washington, D.C. for work, which can be a damper on timing for conception – but, we continued on!

As we approached the sixth month mark my OB/GYN suggested we do fertility testing. Both of our levels were acceptable and the Western medical professionals said to keep trying. Try we did – for another year. I ended long distance commuting and embarked on earning a master’s degree.

It was then that a friend told me “they” were pregnant and she swore up and down it was the result of acupuncture treatments. We decided to make the financial investment and commitment and sought out an acupuncturist that focused on fertility issues. We took eastern herbs in the morning and evening and I did treatments once a week. My mom thought we were nuts, but she kept that to herself! We started the adoption process in parallel with the acupuncture figuring we would win either way, right?

After five months I said to my husband, “I’m done with acupuncture and herbs. We said we’d give it six months so let’s put it to rest. Let’s focus on the adoption.” No sooner did I say this out loud and complete my master’s degree that I thought I might be pregnant. And, “we” were!

We had genetics testing done and experienced the stress of waiting. I had awesome (not so much) morning sickness for the first three months. Actually, it was more “all-day” sickness. When we learned everything looked good genetically we were told we were having a girl. It was all becoming real!

Later down the road I found out I had gestational diabetes so I went through the daily management of food tracking and blood testing. It was rigorous and stressful. I was always wondering if I was taking care of our girl and myself well enough. Her weight and glucose levels at birth were of great concern. I felt every little thing I did would impact her health. My husband stood by me, helping me count carbs and talking me through the stress. He is my rock.

Then, during the last 8 weeks of my pregnancy I had weekly non-stress tests and AFI ultrasounds due to my age. Again, more monitoring, waiting and stressing.

Two days after my due date (on my husband’s birthday!) my water broke outside of a restaurant. I had had visions of this happening and was assured, “Oh, that doesn’t really happen.” All my husband and I could do was laugh and cry. It was a feeling of pure euphoria. 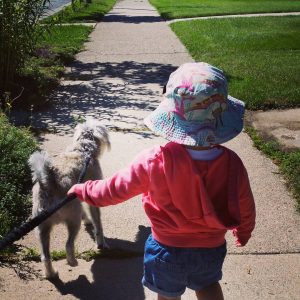 Our girl, Ari, was sunny side up and I would not fully dilate so my labor was long. After 30 hours Ari was born via c-section. She was a petite 6 lb 7 oz and her glucose level was a bit low, but she ate and the level came up. I felt the joy and success of all the work we did as her parents to ensure we brought a healthy girl into this world. I was a first time mom two days short of my 44th birthday. The best part? Dad’s birthday is on July 17th, Ari’s on the 18th, and mine on the 20th.

The past few years had been such a process: Taking herbs, doing acupuncture, watching my blood sugar and then healing from a c-section. I watch her each and every day knowing I would have even done more if I had to. I don’t think a day passes without me tearing up at the sight of our miracle girl. My heart and world have expanded more than I thought possible. My husband and I are in constant disbelief.